Epistane, exhibits a strong, long lasting anti-estrogen effect that is organ tissue specific. This means it works only where you want it to work. Broad range estrogen blockers and aromatase inhibitors can result in system shut down, aching joints, and decreased IGF-I expression. Epistane binds specifically to the 17-estradiol receptor protein in the target tissues. Because of its long lasting and strong effects on specific tissue, Epistane can significantly reduce and reverse the effects of gynocomastia because not only does Epistane specifically block estrogen in breast tissue but it induces an estrogen-depleted condition which leads to apoptosis or the death of the breast tissue cells. Studies show that small doses of the parent compound, Epitiostanol, at just 10-20mg/week showed a complete disappearance of the mass and pain in 25% of the male patients in the clinical trail, while the other 75% of the patients showed at least a 50% reduction in the mass and complete loss of pain in just 4-8 weeks. Thats results in 100% of the male users with no side effects. 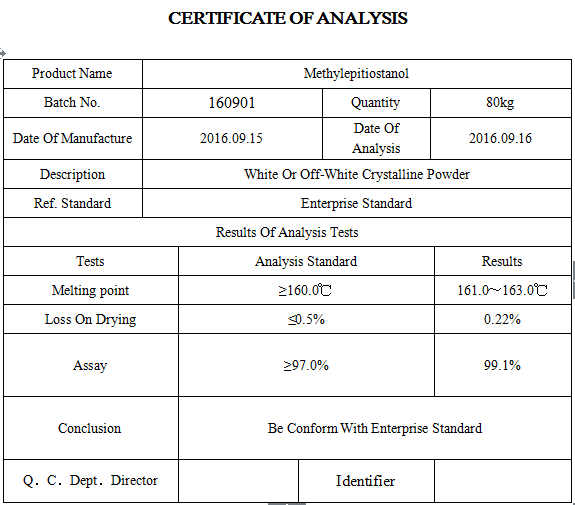 Usage: can be used as pharmaceutical material

Shipping leading time: Within 5-7 work days after receiving the payment

Solubility: It Is Soluble In Chloroform, Methanol, Ethanol, And Slightly Soluble In Water.

DeliveryTime: 4 to 6 work days after payments