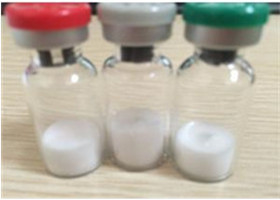 GHRPs are not simply surrogates of GHRH, instead GHRP-6 is an artificial activator of a separate newly discovered receptor called Growth Hormone Secretagogue Receptor (GHS-R). Soon Ghrelin was discovered, the endogenous ligand that binds to the GHS-R. Both Ghrelin and all the synthetic compounds such as GHRP-6 were termed "Growth Hormone Secretagogues" (GHSs). One side effect of GHRP-6 is a significant increase in appetite due to stimulating the release of Ghrelin, a peptide that is released naturally in the lining of the stomach that increases hunger and gastric emptying. Also, GHRP-6 causes stimulation of the anterior pituitary gland which causes an increase in Growth Hormone release. The increased amounts of Growth Hormone can cause the liver to secrete the hormone IGF-1, which improves the animal body’s ability to burn fat and build muscle. Since GHRP-6 acts directly on the feedback loop which signals the inhibition of Growth Hormone release, GHRP-6 can re-stimulate the production of Growth Hormone.